The following recent releases did not get advance listings and thus weren’t in our weekly release schedule.

Battle Volume 1 – A Timeline of Combat Sports & Sports Entertainment: The Results of the Biggest Matches from 1885 to 1992 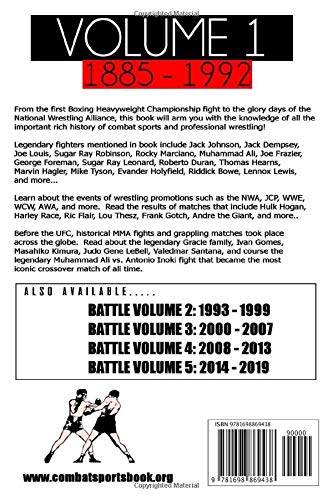 Battle Volume 2 – A Timeline of Combat Sports & Sports Entertainment: The Results of the Biggest Matches from 1993 through 1999

Battle Volume 2 presents the early years of results, interesting facts, shocking moments, crossovers, and much more.Battle Volume 2 covers some of the most historical years in combat sports & professional wrestling. The timeline starts with 1993. Not only does 1993 feature the birth of the UFC, but also the debut of the legendary K-1 World Grand Prix tournament. Beyond those two iconic events that would lead to a rise in MMA & kickboxing, but the year also was the birth of Japanese Mixed Martial Arts due to the formation Pancrase. As UFC was running into problems with being banned in the United States, Pride Fighting Championships became extremely popular in Japan thanks to the pro wrestlers such as Nobuhiko Takada battling the legendary Rickson Gracie. Another Japanese pro wrestler by the name of Kazushi Sakuraba would take Japan MMA to another level as he would defeat four Gracie family members and launch him into one of the greatest MMA fighters of all time.As MMA & kickboxing grew during the 90’s, North America saw the professional wrestling become mainstream more than ever before. The WWF vs. WCW Monday Night Wars was iconic for fans. Both organizations as well as the rising wrestling promotion ECW began to produce events that fans would consider the most iconic shows in wrestling history. From the New World Order invading WCW to the rise of Stone Cold Steve Austin as well as The Rock, wrestling would reach its highest ratings in history. Boxing would have its own impactful moments during the mid-90’s. Mike Tyson versus Evander Holyfield rematch would be one of the most talked about fights of all time. Oscar De La Hoya versus Felix Trinidad would capture the attention of Mexican sports fans as well as the sporting fans of Puerto Rico. Roy Jones Jr. would rise up to become a worldwide superstar. Riddick Bowe versus Andrew Golota would be one of the darkest moments in Boxing history as the fight would spark an out of control riot in the arena. In perhaps one of the most insane & shocking moments in boxing history would occur in 1993 as the ‘Fan Man’ at the Holyfield versus Bowe rematch.This book covers all of those results & tidbits of the biggest events throughout 1993 to 2000. It features results to combat sporting events as well as pro wrestling promotions including the UFC, Pride FC, Pancrase, WWF, WCW, ECW, ADCC (Grappling Tournaments), Battlecade, WVC, IVC, K-1, Pancrase, Rings, Shooto, UWFi, Extreme Challenge, Superbrawl, WEF, Meca Vale Tudo, Inoki Bom Be Ye, and much much more…..Boxing fights cover various boxers including Mike Tyson, Oscar De La Hoya, Lennox Lewis, Riddick Bowe, Roy Jones Jr, David Tua, Pernell Whitaker, the Klitschko brothers and so much more….This is an easy read, simplified single timeline from some of the most historical years in combat sports & pro wrestling ! Do NOT skip this book if you are a fan of any of the big four (MMA, Kickboxing, Pro Wrestling, & Boxing).Chapters in this book include: Chapter 01. 1993 – The Dawn of Mixed Martial Arts & Kickboxing Chapter 02. 1994 – Year of the Upsets Chapter 03. 1995 – The Monday Night War Begins Chapter 04. 1996 – New World Order Chapter 05. 1997 – A Year of Attitude Chapter 06. 1998 – Rise of Austin & The Rock Chapter 07. 1999 – Controversy

Ever since the 1980s, wrestling figures have ruled the minds and hearts of kids and tweens everywhere. It all started in the 80s with companies such as Mattel, Hasbro, and LJN fighting for market share.The companies partnered with or were supported by shows that served as an advertisement medium for their licensed merchandise. Going with the trend at the time, LJN also entered into a partnership with the World Wrestling Federation (WWF), now known as World Wrestling Entertainment or WWE.WWE is an entertainment and media group that organizes and promotes wrestling events. LJN’s partnership with WWF gave the world some of the most legendary wrestling figures in history. 8-inch, heavy-duty rubber figures, the WWF LJN figures could withstand the most aggressive imaginary play.This quality of the LJN figures was one of the main reasons they went onto become the most successful wrestling figures of the 1980s.In this price guide, we name our picks for the best wrestling figures among the LJN wrestling superstar figures, LJN bendies figures, and LJN thumb wrestler figures. We will also provide you with the best available prices for all LJN figures.We believe that it can be hard for most people to track the value of LJN wrestling figures as there is no official price guide bible. However, after you’ve read this book or wrestling price guide, you’ll know what LJN wrestling collectibles are available and what their price is. This will ensure that you don’t buy a wrestling collectible for more than what it’s worth. Additionally, this will help you to get the best possible deal for a collectible you own.

In 1978 as the Toronto territory was taking off with the young stars of Mid-Atlantic wrestling, promoter Frank Tunney introduced a local championship. That title, the first true local title in many years, was called the Canadian Heavyweight Title to be defended by the top star in Maple Leaf Wrestling.The title drew from the earlier days of wrestling when the top Canadian wrestler would defend his laurels across the country and occasionally -the world. From 1978 to 1984 the Canadian title would be defended in Toronto and the circuit towns– and around North America on occasion.During those years locally known as ‘the Mid-Atlantic era’, the area was one of the most exciting and important territories in the wrestling world. Frank was a long-time member of the NWA and was close to many of the major promoters including Vince McMahon Sr. (WWWF/WWF), Verne Gagne (AWA) and Jim Crockett Jr. (JCP)Those relationships would ensure a steady diet of World champions and champions of different territories defending their titles in Toronto. Our Canadian championship would share the stage with those titles, our champions displaying their skills against the best in the world.In this book we will take a look back at the emergence of the Canadian Title in Toronto. We will feature the champions and challengers. Dino Bravo, Greg Valentine, Dewey Robertson, Hossein the Arab, Angelo Mosca Sr. and Jr. Big John Studd, and more.Join us as we go down memory lane and revisit the big cards, the tournaments, the beautiful title belt, and many other memorable slices of Maple Leaf Wrestling from 1978-1984.